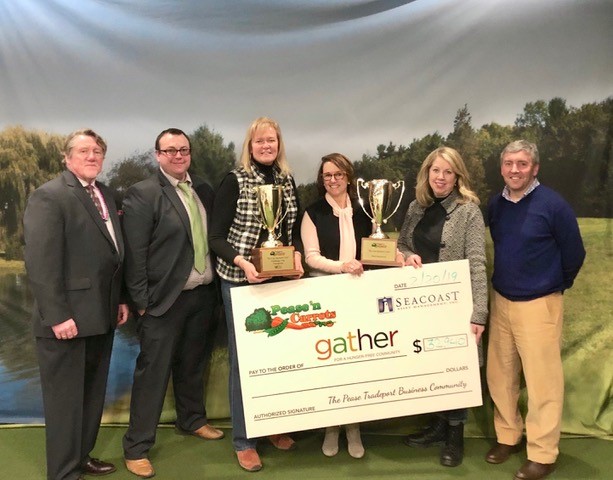 As results from the 2018 Pease & Carrots 11th Annual Charitable Food Drive concluded, NHCIBOR Cares was the proud recipient of its own “giving” to another great organization – GATHER.  Awarded the 2018 “My Cup Runneth Over” trophy.

The first of two presentations occurred at the February NHCIBOR Seacoast Marketing Meeting, where Ms. Bodi was able to share the accomplishment with most of the supporters aiding in the achievement.  The second presentation was held during a Pease Tenants Association Mardi Gras Party hosted by Mr. Sullivan of Seacoast Asset Management where Mr. Sullivan officially thanks all participating team captains and other award recipients.

In addition to the awards, a check representing the cash that was collected during the six-week drive was presented to Angela Ely, Volunteer Coordinator, GATHER in the amount of $32,940.

“Through continued efforts by those like Ms. Bodi, the award, most improved, demonstrates innovation in fund raising by obtaining a matching grant through NHCIBOR Cares, while also seeking support of the members of its parent entity NHCIBOR, as well as her fellow employees at CPManagement, stated Mr. Sullivan.  “In this second year of matching funds, Ms. Bodi was successful in increasing donations by 200% over the first year, and thus the 2018 award winner”, he furthered.

Thank you for contacting CPManagement. We will review your comments and get back to you shortly. If you require immediate assistance, please call (603) 778-6300.